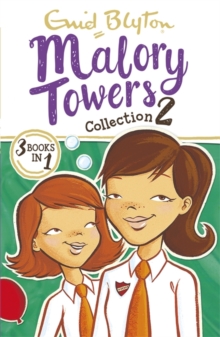 For new girl Darrell Rivers, there are friends to be made, pranks to be played and fun to be had at Malory Towers in Enid Blyton's best-loved boarding school series.Upper FourthDarrell is very pleased to be head girl, but Alicia and Betty are determined to ruin her good work. Meanwhile, Darrell's sister Felicity joins Malory Towers and becomes best friends with none other than June - obnoxious, brash and Alicia's cousin.In the FifthEverybody at Malory Towers is excited about the Christmas pantomime. This year they'll be performing Cinderella and everybody wants to be involved. Matters turn very serious when head girl Moira receives an anonymous poison pen letter. Last TermDarrell and her friends have reached their last term at Malory Towers. But before they say good-bye one last time there are more adventures to be had, pranks to play and competitions to win. Expect drama at Malory Towers!Between 1946 and 1951, Enid Blyton wrote six novels set at Malory Towers. This collection features the original stories and is unillustrated.