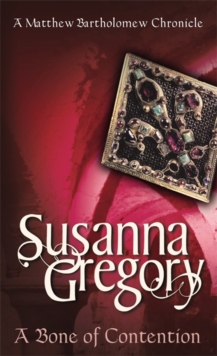 Cambridge, 1392. Matthew Bartholomew, physician to Michaelhouse College, is called to examine some mysterious bones found in the King's Ditch. Next day he is called to the Ditch again: a student has been found dead there. Meanwhile, there is unrest in the town, and the strange disappearance of Dominica, former lover of the dead student and daughter of Waterstone, the well-known Principal of a Cambridge student hostel. Are these events connected? Then a skeletal hand is found in the Ditch, hailed by townsfolk as the final remains of local martyr Simon d'Ambrey, and hence a holy relic. When Bartholomew finds that the hand is wearing a ring apparently identical to a pair that were worn by Dominica and her ex-lover, and now missing, he knows that his investigative skills are called for.