HEROES OF OLYMPUS - MARK OF ATHENA 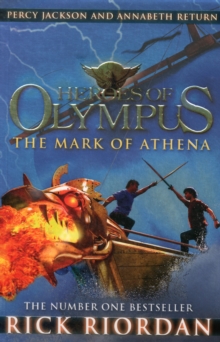 Annabeth is unnerved. Six months have passed and she is finally about to reunite with Percy Jackson. But it appears that Camp Jupiter is getting ready for war. As Annabeth and her companions Jason, Piper and Leo fly in on the Argo II, the Roman demigods get the feeling that the boat is a Greek weapon, with its steaming bronze monster masthead. With the sight of their praetor Jason on deck, Annabeth trusts that the Romans will be reassured that the guests from Camp Half-Blood come in peace but that does not see to be Annabeth's only concern. In her pocket, rests her mother's blessing that is accompanied with a terrifying demand to follow the Mark of Athena and avenge her. Weighed down by the prophecy, the seven demigods are sent on a journey to find and close the Doors of Death. After all that has happened - What more does Athena want from Annabeth? Annabeth's most dreaded fear, however, is that Percy might have changed into the Roman ways. Will he still need his old and trusted friends? Being the daughter of the goddess of war and wisdom, Annabeth realizes that she is destined to be a leader. Depicted by four separate demigods, Heroes of Olympus: The Mark of Athena is a haunting voyage across Roman land and sea, where vital revelations, astonishing sacrifices and unimaginable terror awaits. Move on board the Argo II, to discover her journey. With the old and new joining forces - fearsome foes, a marvelous ship and an exotic landscape, Heroes of Olympus: The Mark of Athena promises to be an unforgettable adventure by acclaimed storyteller, Rick Riordan. It was published on 1st December 2012 and is available in paperback

Other Books By Rick Riordan