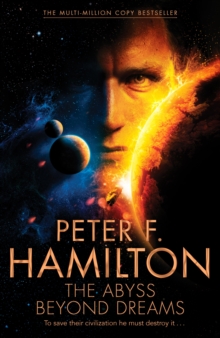 Set in the same universe as his popular Commentwealth Saga and Void Trilogy, Peter F. Hamilton's The Abyss Beyond Dreams is the gripping first voume of the Chronicle of the Fallers.To save their civilization he must destroy it...When images of a lost civilization are 'dreamed' by a self-proclaimed prophet of the age, Nigel Sheldon, inventor of wormhole technology and creator of the Commonwealth society, is asked to investigate. Especially as the dreams seem to be coming from the Void - a mysterious area of living space monitored and controlled because of its hugely destructive capabilities. With it being the greatest threat to the known universe, Nigel is committed to finding out what really lies within the Void and if there's any truth to the visions they've received. Does human life really exist inside its boundary?But when Nigel crash lands inside the Void, on a planet he didn't even know existed, he finds so much more than he expected. Bienvenido: a world populated by the ancestors of survivors from Commonwealth colony ships that disappeared centuries ago. Since then they've been fighting an increasingly desperate battle against the Fallers, a space-born predator artificially evolved to conquer worlds. Their sole purpose is to commit genocide against every species they encounter. With their powerful telepathic lure - that tempts any who stray across their path to a slow and painful death - they are by far the greatest threat to humanity's continued existence on this planet.But Nigel soon realizes that the Fallers also hold the key to something he'd never hoped to find - the destruction of the Void itself. If only he can survive long enough to work out how to use it . .