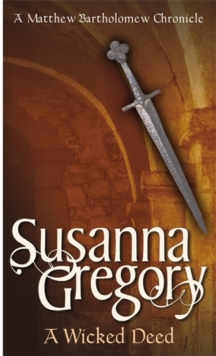 Matthew Bartholomew, doctor of medicine and fellow of Michaelhouse, Cambridge, is travelling with a party from the college to accept the gift of the living of a parish in Suffolk. One of his companions, Unwin, an unworldly scholar, is to be installed as priest. Their journey is not without incident - they are chased by footpads, pass through an eery village abandoned after the recent plague and find a man barely alive on a gibbet - so they reach their destination with some relief. But their thoughts of recovering while enjoying the local Pentecostal Fair are soon curtailed, as they are immediately thrust into the machinations of local boundary disputes between three landowners. Then all such squabbles seem mere trivia when Unwin is murdered in the very church which was to have been his home. While trying to investigate a possible motive for his killing, Bartholomew discovers that this is not the first unnatural death in the village - deaths which everyone has put down to the curse of the plague dead village. He is of too practical a mind to believe the superstitions, but is he wily enough to work out the real motive behind the murders and who will gain from them?