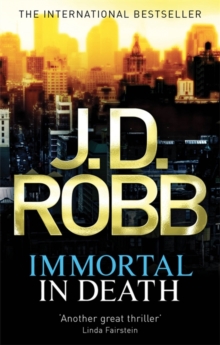 'She'd come to New York to be a cop, because she believed in order. Needed it to survive. She had taken control, had made herself into the person some anonymous social worker had named Eve Dallas'But in a few weeks she won't just be Eve Dallas, lieutenant, homicide. She'll be Roarke's wife. But Eve's wedding plans may have to be put on hold as her private and professional lives collide... The victim in her latest murder investigation is one of the most sought-after women in the world. A top model who would stop at nothing to get what she wanted - even another woman's man. And Eve's chief suspect is the other woman in this fatal love triangle - her best friend Mavis. Putting her job on the line to head the investigation, Eve discovers that the world of high fashion thrives on an all-consuming passion for youth and fame. One that leads from the runway to the dark underworld of New York City where drugs can fulfil any desire - for a price . . .