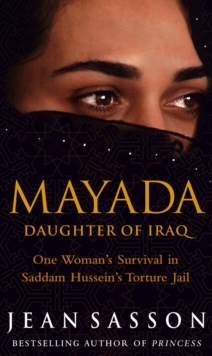 Mayada was born into a powerful Iraqi family. One grandfather fought alongside Lawrence of Arabia. The other is acclaimed as the first true Arab nationalist. Her uncle was Prime Minister for nearly forty years, her mother an important politician. When Saddam Hussein and his Ba'ath party seized power, and instituted his reign of terror, Mayada found herself alone in Baghdad, a divorced parent of two children, earning a meagre living printing brochures. Until one morning in August 1999 she was summarily arrested and dragged to the notorious Baladiyat Prison, falsely accused of printing anti-government propaganda. There she was thrown into a cell with 17 'shadow women'. Like latter-day Sherezades, these women passed their days, while waiting for the next interrogation and torture session, telling each other their stories. They were eager to hear Mayada's stories of her privileged former life, of the history of her proud family, of kings and queens, of meetings with Saddam himself. Not only the story of a woman intimately connected to Iraq's cultured, ancient history, this book is a powerful witness to the terror and horror wrought by Saddam on the lives and souls of its ordinary citizens.