Empire Of The Moghul - Serpents Tooth 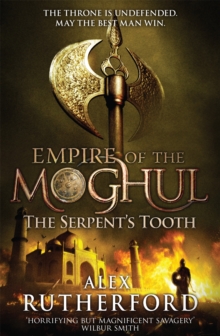 The new Moghul Emperor Shah Jahan reigns over a colossally wealthy empire of 100 million souls. Yet to gain his throne he has followed the savage 'throne or coffin' traditions of his ancestors - descendants of Genghis Khan and Tamburlaine. Ever since the Moghuls took India, brother has fought brother and sons their fathers for the prize and Shah Jahan has been no exception.As his reign dawns, now is the time for Shah Jahan to secure his throne by crushing his enemies. Instead, devastated by the death of his beautiful wife Mumtaz, he becomes obsessed with building an epic monument to their perfect love - the Taj Mahal. His overwhelming grief isolates him from his sons and he does not see the rivalries, indeed hatreds, building between them. When he falls ill, civil war breaks out - ruthless, murderous and uncontrollable - and the foundations of the empire itself begin to shake.