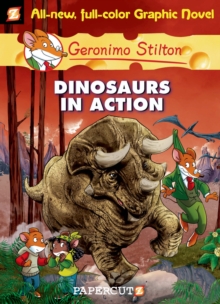 Geronimo Stilton is the editor of the Rodent's Gazette, the most famouse paper on mouse island. In his free time he loves to tell fun, happy stories. In this adventure, Geronimo has to face his worst enemies, the Pirate Cats, who have discovered a way to travel back in time and change history, but this time is really different! The Pirate Cats have finally realized that it is the assisstance professor Ampy Von Volt provides Geronimo Stilton that has helped him foil their plans time after time. So now they don't know to go after Geronimo's Friend professor Von Volt and send him 140 million years in the past, in a time when the earth was ruled by dinosaurs! He won't be able to help Geronimo if he's trapped in the cretaceous period and how can Geronimo stop the Pirate Cats without his friend's help?